Receiving two scholarships from UQ made it possible for Connor Brackin, a Bachelor of Laws (Honours) / Bachelor of Business Management student, to attend university while helping his mum with their living costs.

The University of Queensland was never really on Connor’s horizon.

He completed most of high school in Sydney, until his family made the move to Queensland in 2017. When he competed in swimming nationals in Brisbane that year, Connor’s mum realised this was where they needed to be.

“Unfortunately, because of some events out of our control, she wanted to be closer to her family,” he says.

“The transition was tough. I had quite a few friends in Sydney. But my family needed it for their sanity – I think mum needed it the most, so I had no problems with it.”

What led Connor to his UQ scholarships?

Even after transferring to St Peters Lutheran College in Brisbane, Connor didn’t expect to have the financial means or academic grades for UQ.

“I actually never thought I was going to come to UQ,” he says.

“I never thought I’d get the marks to get into law here.”

Clearly, he underestimated himself.

“I actually got it somehow, and I remember being so happy when I got the acceptance letter,” says Connor.

“It was a phenomenal feeling and such a special moment for our family, so attending UQ means the world to me. I have it every day in the back of my head that it’s such a good experience to come here and that I’m so lucky to come here – I’m inspired to learn as much as I can and try my hardest.”

Receiving a UQ Law School LEAD Scholarship and a UQ Link Scholarship unleashed a second wave of emotion on Connor and his family. He applied for them in the hope that he might help his mum with their living costs, so it was both a thrill and relief when they got the news.

“My mum’s been through a lot and she’s done so much for me, particularly through my education, so I felt this scholarship was a great way to give back to her financially,” says Connor.

“She sacrificed a lot for me to attend a private school. She got a full-time job once we moved up to Brisbane to pay for my school fees.”

Finding out he’d received the scholarships was a life-changing milestone for both Connor and his mum, because it meant he could study at UQ while also:

“Without my scholarship, life would be a lot harder, that’s for sure,” he says.

“I wouldn’t have the security like I have now.”

“When I got confirmation of my scholarship, it was the best day of my life. I remember telling mum, and she was absolutely over the moon. She didn’t say it, but I think she knew that it would help us financially so much. To be able to give back to her made me emotional as well, so it was an amazing day.”

Why did Connor choose to study law?

Just as Connor’s motivation to get a scholarship was to give back to his family, his drive to study law is all about giving back to other people facing similar obstacles. And while his first thought might have been to study health and medicine, he also has the self-awareness to pick the right personal path.

“I became interested in law because I wanted a way to impact people’s lives,” he said.

“I knew medicine wasn’t really my route to go down because I’m not very science-y or mathematical, so I felt law was my next best option.”

Connor is particularly fascinated with public law and the professionals in this field who do so much behind the scenes to improve situations for people.

“In Sydney, we had a few legal issues, but we didn’t have the financial means to properly seek them out,” he says.

“So, I’d love to start a low-cost legal firm and help people who are in a similar situation to what I was.”

“Receiving this scholarship has very much inspired me to give back. I just know how good of a feeling it is to have someone believe in you. To give that feeling back to someone else who deserves it would be amazing.”

While Connor may have only recently started his law program, it wouldn’t surprise anyone to see him doing charity legal work for disadvantaged people in the not-so-distant future.

“The impact I’d love to have on the world is to make it an easier place for people who don’t have the financial comfort,” he says.

“It’s good to have the same opportunities as people who have a lot of money, and I feel like doing quite a bit of pro bono work with law would be a great opportunity to get a bit of equality back into the legal services.”

Connor’s advice for other students

Connor knows applying for a scholarship can feel a bit daunting, but he thinks anyone considering it should absolutely go for it.

“It can be a bit of a process sometimes, but you’ve just got to do it,” he says.

“Don’t leave anything on the table. Be 100% honest in your application – no one’s going to judge you for it.”

For those feeling nervous, Connor’s story is evidence that even a single person believing in you can make a world of difference.

Who is that person for him? No surprises here – his mum is his hero and his rock.

“She’s so strong; she has done everything for my sister and me,” says Connor.

“Words cannot thank and express how much I love her.”

“What gets me up in the morning is my family. They’ve done so much for me, and every day I strive to give back to them.”

And even for those who may not feel like they have that cheerleader in their life right now, Connor believes you’re sure to find that support at UQ.

“It’s such an inclusive environment – nobody judges you here,” he says.

“I haven’t met a single person who has judged me based on what I wear or what I look like. Everyone is here to do their thing. They’re here to study. Don’t be nervous at all because everyone will accept you.”

Discover other student stories and learn how to apply for your scholarship at UQ. 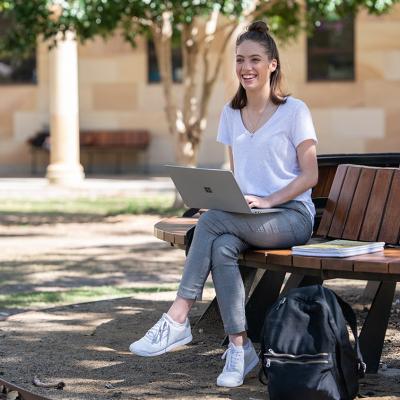 First in family to go to university: Appolonia’s scholarship story

First in family to go to university: Appolonia’s scholarship story 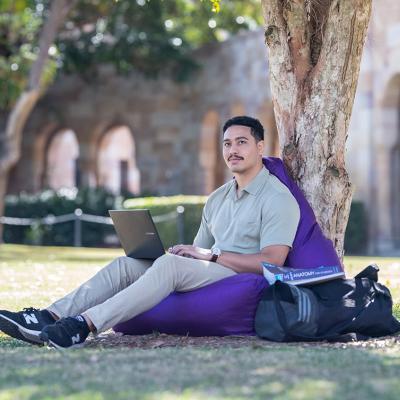 Giving back to his community: Nathan’s scholarship story

Giving back to his community: Nathan’s scholarship story 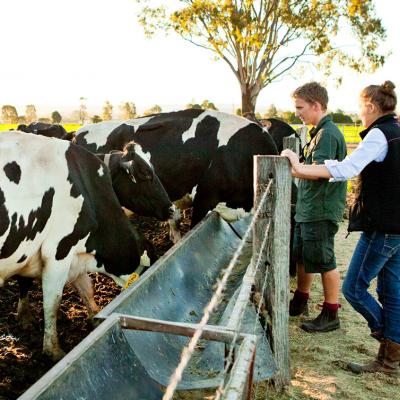 Rural and regional scholarships at UQ

Rural and regional scholarships at UQ 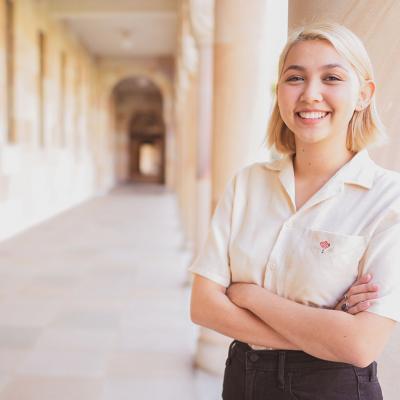 Equity scholarships at UQ: how to apply

Equity scholarships at UQ: how to apply